Today, I help make it happen, making an almost a hundred kids beamed in delight as they munch on the food and drink we serve for lunch. It was heartwarming. The 2-hour walk and climb that we had to endure to reach the place was a little hard and tiresome but it was all worth it. Seeing so many smiling and giggling children as they line up and receive their gifts were euphoric. I definitely will join again. 🙂

YPRO and friends didn’t have their yearly sharing. Being a little busy at work and personal, I just had to let go of the yearly habit. Hope next year will be different. This year was supposed to be our 5th gift giving. 😦 Instead of totally giving in to my hectic schedules, I asked a number of friends if they knew people organizing sharing activities. I badly wanted to join. I couldn’t keep still. A friend at my climbing group told me about a yearly outreach in his previous workplace’s climbing group. And so he introduced me to Tess.

I didn’t really mind the thought of going in alone but my friends are into these stuffs as well. Unfortunately, the first schedule was December 13. It was our close friend’s wedding. No matter how I want to join, I couldn’t be absent in Corie’s wedding. I love her too much not to be part of a new chapter in her life. I had to chose. But as if the gods heard my un-prayered thoughts, the schedule was moved. I didn’t have 2nd thoughts of going. I just had to even if I partied until 12 AM after the wedding.

I was actually a little scared since I only have 3 hours worth of sleep. The call time was 7 AM but I had to think it was 6 AM ’cause I don’t want to keep them waiting. Despite the late notice, I had 4 other friends who planned to go. But it ended with just me and Charina. We arrived at Guadalupe church at 6:30 AM. While eating our breakfast bought at Jobe, Charina called my attention. She saw another climber. And as usual, I act without thinking and immediately assumed he was with Tess. Haha! Turns out he is from another group. Awkward  but of course, I made it through. “Miss baga gyud diay ka ug nawng!”. Charina said with a smile after the guy left. So I told her about the times that I had to make the first steps to know people. It is not easy but you have to think that others find it hard too. If nobody will break the ice, then you’ll go through life wondering how that awkward first step put you a step farther.

It wasn’t really that hard at all. I feel that every Mountaineers have this sort of connection. He even told us the story of his Apo trip. And of course, I did too. But not really the juicy detail that’s in here. Just some.

I’ve never been to Babag. It was Charina’s first climbing activity. Her spirit is determined but I know from experience that sometimes, determination and will is not everything in the mountains. You have to be physically fit in all aspects. I have no doubts on Charina but it was my first and I had doubts. My climbing group has a bad experience in Babag. From their stories, I knew they underestimated the climb by starting it late in the afternoon but still it didn’t change the fact that I don’t know anything about Babag at all. It feels scary.

Charina has a backpack. It was a little heavy cause she brought school supplies  for the children. It makes me more scared cause I know how hard it is to carry things uphill. Good thing, another guy from another group offered to carry it for her. Wew! Something was lift off my worries list. I was tempted to have mine carried as well but it was lighter than my usual pack so even if I’m worried I know I can do it. But just in case I couldn’t, of course, I have a backup plan. 😀

The first hour of the trek was just plains and a little uphill. I had no qualms but I kept on asking Charina of her well being. Oh well aside from I tend to be motherly at times, it’s her first time. I kept talking and talking and talking to  keep me off my worries. Haha! I think it works. 😀

The next hour was the assault. It was definitely an assault. Charina tried on my backpack. I was happy. It’s good to have another girl power in the team, hoping for a new recruit. 😀 I told her to tell me if it’s too much. She did after a while but I sure did catch a lot of my breath having that pack out of my back. 🙂

And then we reached the place. We saw other climbers on the mango shade. The mango tree has a platform over it’s branches. I couldn’t resist climbing it. There I meet a new face. I forgot his name. Maybe it was Coran? LOL But he’s from the company of a new face I’ve known from our previous Apo climb. Asked him if he knew him. Unfortunately, he didn’t. He was so gay telling me about his group. Even showed me their cool banner. That is after I laughed at the name of their group. It was “Hubo” which means naked in vernacular. I even asked his number. Oh well now that I remembered, I have 3 numbers added on my phone book. 😛 I’m totally is the girl. 😛

And then I got busy with helping and forgot about them. Charina and I were a team. And I felt as if they considered us part of their team as well. We helped in almost everything. I didn’t feel like an outsider. I sure hope Charina feels the same.

While Wilma and Anne are busy with the program, the others prepare the giveaways and the food. I am amazed at how Tess did the tasking. Haha! Maybe I should be more like her. It kind of remind me of a friend’s bad experience in a volunteer organization. She talked about how the execom seem to boss around. I wanted to tell her that I usually do bossing too since it makes people do things. But today, Tess just proved me wrong. 🙂

There were games and prizes. And everyone seems to enjoy their part. We started the program at around 11 I think so the sun was burning hot. I didn’t actually remember how hot it was until I feel the burning sensation in my face and nape. Oh boy! My face and nape still feels hot when touching them now. Waaaaaa! Hopefully the sun burnt skin wouldn’t peel off until Thursday. Huhu! I don’t want to attend our company party with that face. 😐

After we wrap-up the party with the kids, we started our own party as well. I just had my first boodle fight. Yahoooo! The “lansang” and “hipon” were yummy. I believed I ate more than I had to but it was so yummy, I didn’t mind the extra pounds. Wahaha! And then it was time to go! I really have so much fun. I hope to join with them again. 🙂

As a challenge, I will list the new names I have today.

I hope I didn’t miss anyone. 🙂

So that’s it. Happy to have returned from my hiatus with this story of my outreach and a climb. Love! Love! Love! Good vibes!

More pics at my page! Post by Kring’s Place. Enjoy! 🙂

Follow The WANDER (FULL) LIFE on WordPress.com
Join 1,183 other followers 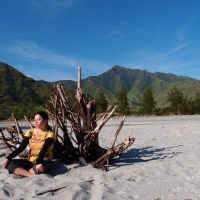 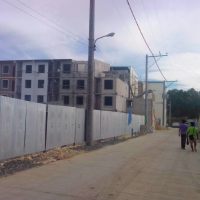 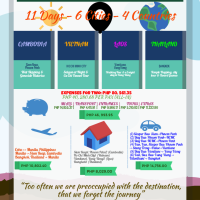 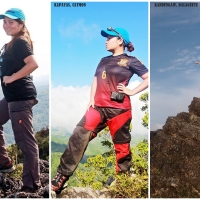