The trek to the actual start was a pain. It was about 1 KM of uphill struggle from the hospital to Ladlad Resort. I was having a hard time that even the witty #hugot signs on the way wasn’t able to take my mind off the breathlessness. In my thoughts, I was silently regretting why I pursue the trek. With my reverie, I didn’t notice the group took a left turn inside “Elena” Resort. And as soon as I caught up with the rest, I hear them complain about the entrance. 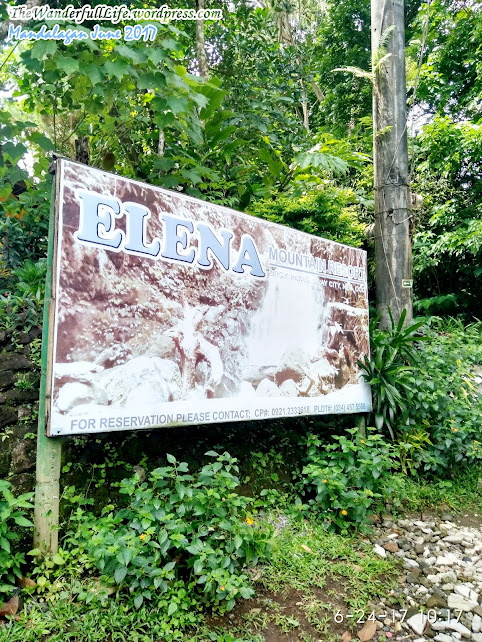 Pay Trouble Round 2: Remember the entrance fee at The Hospital? Elena Resort asked us to pay just by passing through. It was only Php20 but we were disappointed. Why is this necessary? We are just passing through.

So the guide led us out as if sending a signal that there’s another way. Before proceeding, we first gathered in prayer. And I loved my new role – the prayer leader. Glory to God for the newfound confidence. Thank you Lord!

Pay Trouble Round 3: We thought that there’s really another way to pass through without paying but when we went into “Ladlad” Resort, same thing happened. We were asked for entrance just by passing through. Yet unlike “Elena”, “Ladlad” settled on a bulk payment of Php100 for 14 pax not including the guides. To settle hastily, Pete owned up the payment.

So what’s happening? Why were we asked with multiple entrances? What’s the permit for? The permit should have covered it. Yes, the entrances were not big but was it legal? Surprise payments are just uncool.

We walked right away as soon as we were done paying. Beyond “Ladlad” resort was a small clearing and then into the forest.

Someone asked as we inched our way farther from the clearing. The guide answered that it has started already. My heart dribbled. The face your fear moment has finally began.

When I hear the guide’s statement, I felt my heart skipped but I couldn’t care much as I was already panting at that time. In my thoughts, my consistent steps were more important than minding the leeches. But is it?

We had our first major leech encounter at the creek. The husband asked me if I saw any leeches on him. I said no but as soon as I turned around, one of our companions shriek as she found one leech on the husband’s face. The husband then looked at me with a quizzical expression. Of course I was sure there was no leech when I checked. Sneaky little suckers!!!

After a while of walking through the leech-infested forest, the shriek had become normal. I saw the husband getting braver in taking out the leech on his own. And maybe because he’s so sweet, he was also a leech favorite. There were 2 more instances of leech landing on his face. And thankfully, maybe because we were all paranoid, the leeches never succeeded in sucking our bloods. We took them out before they were able to penetrate on our skins. Everyone participated in looking at each other’s back for leeches, very commendable companions indeed. All hail Tribu Iskwatters!!! Thank you so much for being an awesome comrades!

At 12 PM, I was famished. I kept asking the guide if we were halfway. He said were not even to a quarter yet. As I checked the time, I realized we’re only just walking for about 2 hours. The total estimated time was 5-6 hours but at the rate of our pace, we were behind. We were supposed to target eating at “The Platform” where the leeches were gone.

We only took a 30 minute lunch break. While eating, we were still on the lookout for them little suckers. We left the lunch site at 12:30, by 1:00 PM we arrived at the platform. Surprisingly! Relief washed over me when the guide announce that the leech trail ends at “The Platform” and that we were half way thru after almost 3 hours of walking.

And Finally My First Leech Touch

Every time a leech attached itself to me, I would quickly asked the husband to get it off me but after “The Platform”, we relaxed. It was then that I almost had my first leech blood. Good thing I noticed right away as it attached on my right middle finger. Since the husband was far, I had to pluck the leech myself. It was so soft it grossed me out but I feel brave to have done it. Hurray! Miga version 2! Braver and leech-remover! LOL

The next half of the journey was leech free but noticeably harder. More steep ascents. There was even an almost vertical climb that sucked all my energy away. We passed by a water source and then it was more uphills. By this time, I was already very exhausted. No more pictures until the overlooking part when the guide said that the camp is just an hour away.

When the guide showed us the view of the camp, my energy suddenly surged back. I imagined the future happiness and has totally forgotten the past exhaustion.

However, the descent to the camp is not at all easy but you will totally forgot all the pains the moment you step into the ultra big camp site. It’s maybe the biggest camp that I have been to and the prettiest too. We step into the end of the camp at around 4:30 but we camp to the other end. It took us some time to reach the other end.

I planned to rest immediately as soon as we finished putting up the tent but surprisingly, my energy has gone back to normal when we were done setting up camp. Instead of resting, I just took pictures instead. But because Tribu Iskwatter men were awesome, dinner was prepared by them so I had the chance to doze off. Yay! Thank you so much again Pete and friends!!! 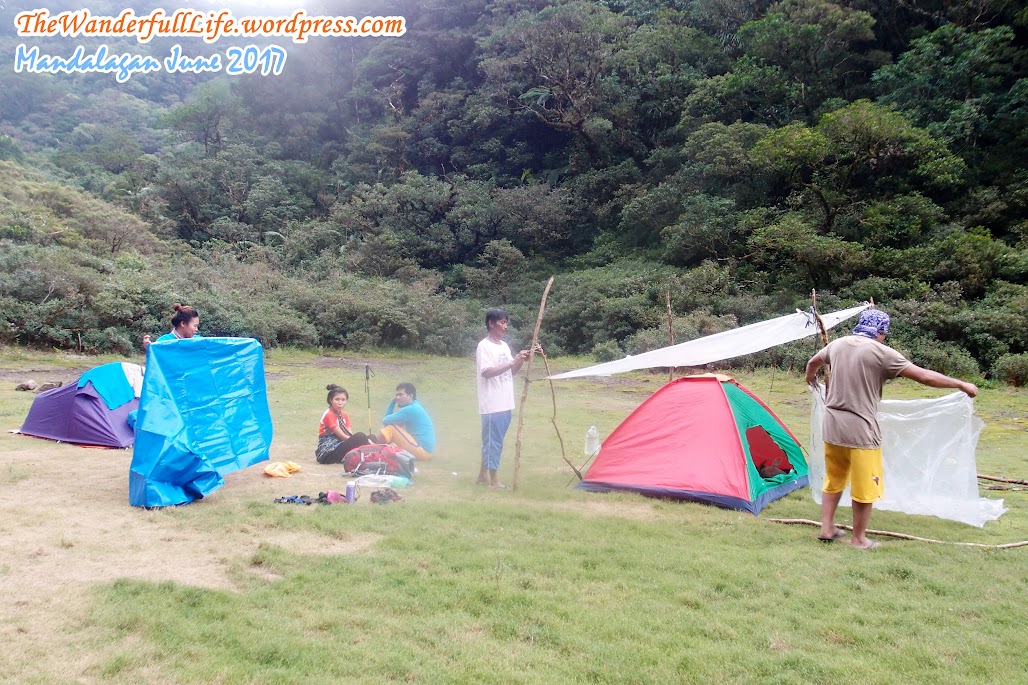 We were then woken up for dinner. After dinner, we did socials led by Gil where “our motto” was the headache of the night. It was an awesome way to bond and get to know each other more. Of the 16 people including the guides, we only knew 5 (Van2x, Carl, Gil, Jill, Pete). But after the socials, our bond strengthened more as we played “Werewolves”. I’m once again the dispensable “Villager” who surprisingly survived until the very end. Yayyyy! The villagers won over the 2 cunning wolves, Jill and Pete.

Lights off at 10 PM right after a game of Werewolves and agreeing to miss the Sulfatara. I’m all for missing it as waking up at 5 AM was too much. It would have been awesome if we camp there for 2 nights to have ample time to visit Sulfatara for half day then rest and play in Tinagong Dagat. I don’t mind camping there for two nights really.

Despite the unprepared body and the threat of leeches, the trek to Tinagong Dagat was awesome. God has indeed blessed us with so much. No rains as we trek and camp for the night. For the first time, we were able to use the stargaze functionality of our tent. Tinagong Dagat was Tn2’s first major camp. Hurrayyyyy!

And before dozing off to dream land, I murmured a prayer of thanks to Father God for being so awesome and prayed for a safe descent. And yes, prayer granted the day after. Stay tune on my next and last post for Tinagong Dagat. We went to “The Ruins” too! I hope you enjoy reading as much as I enjoyed writing and reliving my memories of Tinagong Dagat.

Follow The WANDER (FULL) LIFE on WordPress.com
Join 1,183 other followers